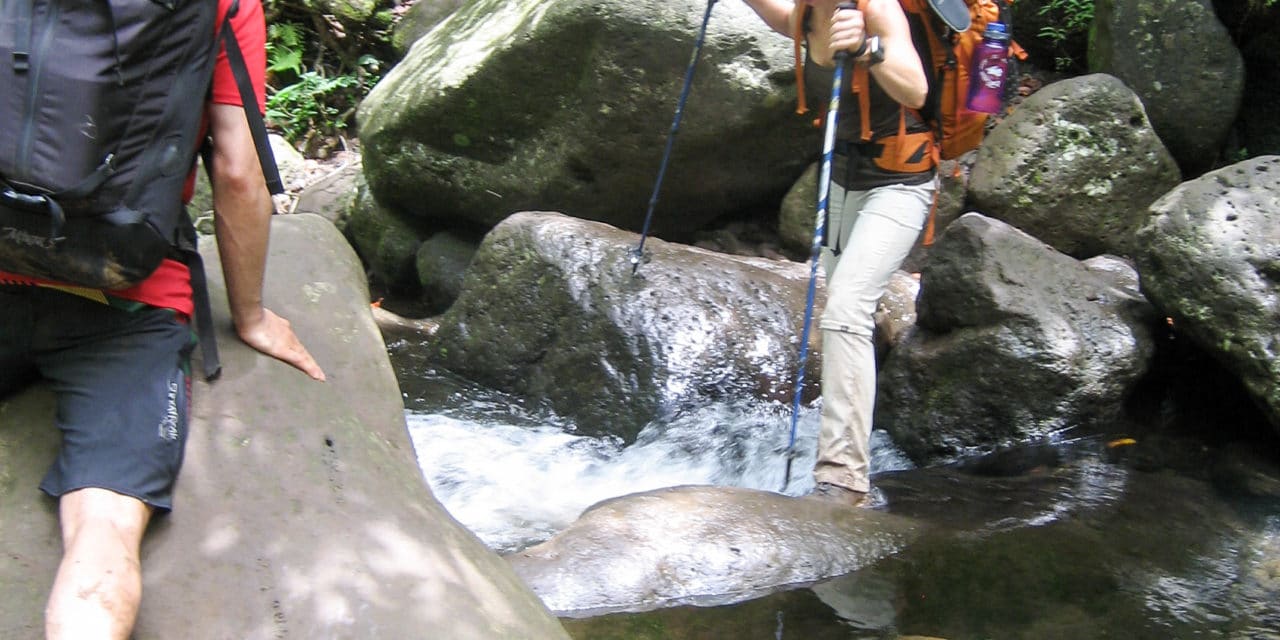 What to Expect on the Kalalau Trail

We continue on the trail and the next major section of this hike is traverses of a number of valleys that face the ocean.  These valleys have high ridges that serve as walls on the side and then the bowl or depression in the middle that are the valley floor.  We will go through a handful of these valleys; high on the walls, dropping down to the valley floor, and then climb back up the other wall.  These valleys are different shapes and sizes, but the routine is the same.  That variance is how high you may be on some of these side walls and, how much you drop down to the valley floors.

Trail conditions are very interesting.  We were expecting warm conditions, we were expecting rain, rocks, river & stream crossings, getting wet, getting muddy and lots of sun.  We got everything we expected, though we escaped any big rainfall during the hike.  We only experience just a drizzle in a few parts of the day.  The trail after the 2 mile point resembles a lightly used trail you would find in the backcountry.  I got the distinct impression that the only reason a trail actually exists is because of the foot traffic and not because of any official effort.  Visualize Hawaiian backcountry with unlimited sun and water and you got it — never-ending growth!  There were portions of the trail with an abundance of mud, which made it interesting to make progress uphill, but the real laughs were during downhills on steep muddy slopes.  Because of these conditions, I would classify the Kalalau Trail up there with the roughest backpacking trails anywhere, unless one is just bushwhacking through a jungle.

People are wound up due to the long 11-mile one-way hike to Kalalau Beach, the effort involved with the climate and trail conditions, and the sketchy cliff-side sections.  All of those live up to their reputation.  First, if you are a casual hiker, even an 11-mile flat trail in your local park is not exactly a light day by any means.  Combine the 11 miles of sometimes quite challenging trail conditions with the almost certainty for excessive heat, humidity, rainfall and intense sun — and absolutely you have a challenging day hike to get to Kalalau Beach.  Next, while the cliff-side sections can be frightening for those not used to heights and questionable terrain, I personally felt that that the infamy was overblown.  Not so much that it’s untrue or a big exaggeration.  Again, it comes down to your expectations and experience.  We are rock climbers and have hiked trails in Yosemite National Park and elsewhere that routinely have easily fatal exposure, so this isn’t anything new.  I also say this in that the rest of the trail that isn’t specifically called out as dangerous — should be called out because it is!  Those valley walls I described earlier are as equally sketchy, in my view.  If you are paying attention when you walk by, you will notice that often you are figuratively really not walking on much more than just some soil that gives way immediately to a huge fall.  What perhaps lulls people into not noticing this is the grass and over growth, that is hiding this reality.  I noticed many times that there isn’t much there at all to hold you from dropping a long way besides some superficial greenery.  The few minutes on the obvious sketchy sections get the obvious call-out by most hikers, but the hours you’re hiking on questionable and tight trails deserve your attention, especially when you’re tired and potentially underestimating your situation.

The research, preparation and gear we brought paid off almost perfectly for most of us in terms of food, water, clothing, and camping gear.  We arrived at Kalalau Beach after about 8 hours on the trail.  Some in our group had various issues (overexerted, overheated, and knee issues), so it cost us an extra 1-2 hours in overall time.  There were many stream crossings, including about 3 full-fledged small river crossings that involved good agility and finesse to boulder hop or wade across with your big weighty packs.  We treated water from these sources and no one got sick or picked up any diseases/parasites during the whole trip.  The water was quite cool — as it drops from the sky, goes into the forest, seeps through the ground and ends up in these rivers.

We met a few people on the trail, spanning the variety of folks you can expect on such a trip.  I was expecting a mix of 80% backpacker types and 20% more “hippy” people (sorry, that’s my lazy word for lack of a better description).  Instead, flip that percentage around and it’s more accurate.  Some are those that travel the islands (and the world) and are people that are effectively “outside the system”; free spirits.  We traded food and items with them and they gave us fresh apples and avocados.  Interestingly, some encountered on the trail were barefoot!  A couple of us wore Innov8 hikers and they were an excellent choice for the conditions.  I won’t get too deep into planning and gear considerations in this trip report.  If you’re considering this experience, we can give you the full briefing on how to be ready for a great experience.

Back to Part Two

Backpacking the Kalalau Trail – Part One